Wesleyan’s natural history collections, which have begun to emerge into public and accessible spaces on campus in the last few years, are extensive, and include fossils, minerals, stuffed animals, bones, and animals in bottles with alcohol. We have only just scratched the surface of these collections, with the discovery and restoration projects of the Glyptodon and the Deinotherium, which can be viewed in the lobby of the Exley Science Center. Now we’re diving deeper into this educational journey with another fascinating find: the skull of a Mosasaurus hoffmanni Mantell 1829, which will take us down into the depths of the Late Cretaceous oceans of Europe and the United States, the latter named the Western Interior Seaway. The Mosasaur, an extinct, predatory marine reptile, was discovered in a limestone quarry in the southern part of the Netherlands in the 1770s. 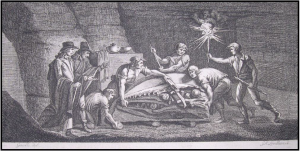 ‘Mosasaur’ literally means ‘Meuse reptile’ , a reference to the French name of the Meuse River (Maas in Dutch) in the southern Netherlands, near Maastricht, where  fossilized remains of this creature – its skull – were first discovered. Dr. C. K. Hoffman (after whom  the creature was subsequently named) studied the fossilized remains and assumed that they belonged to some sort of giant reptile, like a crocodile. Indeed, this ancient beast was fully adapted to living in the oceans in the later part of the Cretaceous Period, maybe about 70-65 millions years ago, and moved through the water using an undulating tail movement, much like a crocodile or a snake. Its earliest ancestors have been dated back to about 100 million years. However, the Mosasaur was not closely related to crocodiles or snakes or dinosaurs, but rather, it is a giant lizard. The Mosasaur was a very successful predator, probably in large part due to the ecological dynamics relating to the evolution and extinction of competing marine reptiles. For example, the Ichthyosaur (fish reptile), fossil casts of which are displayed outside the Wesleyan’s Joe Webb Peoples Museum of Natural History on the fourth and third floors of Exley Science Center, was probably declining in abundance around the time that the Mosasaur was establishing itself at the top of the food chain.

How did Mosasaurs look, as whole animals, reconstructed from the bare bones found? 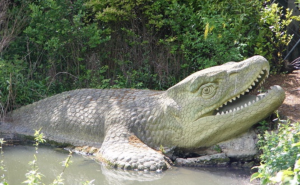 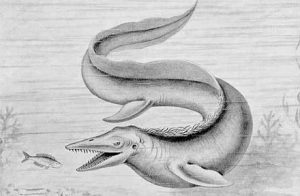 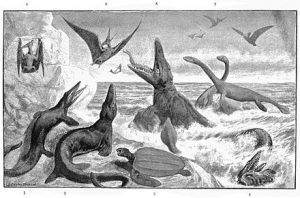 Over the years, the Mosasaur, as well as many other mysterious creatures whose fossilized remains prove their existence in past time periods, have been the objects of everything from idle musings to wild speculations as to the nature of their living forms. The lives of the creatures that came before have always fascinated humans, and this fascination is reflected in the varied modes we have employed to recreate and reconstruct their material qualities: how they moved, what they ate, but especially how they looked. Above are pictured some early  approximations (now thought to be outdated) of how the living Mosasaur might have appeared. The upper figure shows the reconstruction of the Mosasaur, build as a part of the landscaped ‘prehistoric park’, properly the Dinosaur Court, created during the early 1850s to accompany the relocation of the Crystal Palace from Hyde Park to suburban Sydenham, London, UK).

The fluctuations in these models have occurred in parallel with shifts in not only the scientific, but also the social and scientific landscapes over time: paradigms structure the way we can understand and use the scientific evidence available in making conclusions about life and the world. This idea was popularized by Thomas Kuhn, a physicist and philosopher of science, when he wrote The Structure of Scientific Revolutions. His model charted the accumulation of discontinuity in the normal state of things, leading to conceptual breakthroughs that ushered in new states of ‘normal,’ which differed fundamentally from those that came before. We are limited  – in a certain sense – by the paradigm within which we gather evidence and draw conclusions, as is clear from the older visualizations of the Mosasaur, which we might now consider ridiculous. However, comparing the previous phases of scientific knowledge with what we know now can provide fascinating insights into the changing processes of inquiry over time. 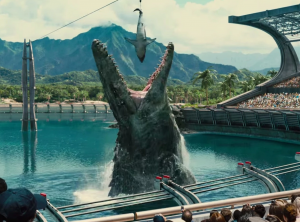 We have come a long way since these beginnings. In 2015, Jurassic World became the latest installment in the ‘Jurassic Park’ movie franchise, a testament to our sustained interest in recreating the living forms of extinct creatures for present consumption, especially in this context of entertainment (pictured above). The Mosasaur makes a surprise appearance in an aquatic stadium reminiscent of Sea World, where an audience gathers to witness the impressive beast consume a large shark – with some exaggeration of its size, just as the Velociraptors in the first Jurassic Park movie were cast larger than their actual counterpart, the Deinonychus.

Beyond the movies, visualizations of extinct creatures such as the Mosasaur are relevant for interdisciplinary studies inside and outside the Wesleyan community. For example, fossils and fossil casts as well as other specimens in the natural history collections can be used in both arts and engineering contexts, as part of the IDEAS program: the Mosasaur may become the star of yet another act of speculative and compelling storytelling.

The Mosasaur skull in Wesleyan’s collections, one of the series of Ward’s cast of famous fossils (like Shelley the Glyptodon and Terry the Deinotherium)  will soon be displayed in Olin Library, inside a table custom-made for its display, where students of varied academic disciplines and interests can enjoy its unique history along with its form. 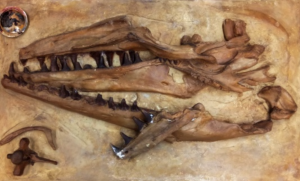