Exley Science Center does not exactly seem to be the most mysterious place on the Wesleyan campus, but few people know about the existence of ‘The Penthouse’. If you have ever taken a class in one of the natural science fields, frequented the lovely Science Library, or patronized the comfort coffee of the Pi Café, you have experienced a bit of Exley. However, even among the hard-core science students of Wesleyan University, few have ventured to the rooftop storage place appropriately named “The Penthouse.” The almost-mythical elements of the Penthouse, with its treasure house-like allure of abandoned scientific equipment, piqued this blogger’s curiosity. In addition, the Penthouse was rumored to host valuable and large plaster casts of fossils, being an ancient place filled to the brim with scientific history.

For a research assistant in the fields of Paleontology and Museum Science, going on an expedition is a necessity. So, the aforementioned rumors of the existence of plaster copies of rare fossils, which have not seen daylight since they were moved into Exley (~1970) in such a rarely-seen place goaded us into activity. As a part of the project to increase the visibility of the Joe Webb Peoples Museum, the mineralogy and paleontology museum on the 4th floor of Exley, I ventured to the mysterious Exley’s Penthouse, the topic of this first blog on Unseen Wesleyan.
The expedition started at around 1:30 pm on Friday, June 16, 2017. We popped into the creaky service elevator, using a special key obtained from an unknown source. The key barely registered any confirmation signal of activity, but our source assured us that it would work. The elevator pulled itself frustratingly slowly past the top (6th) story of Exley, and we arrived at the Penthouse. The thick, unventilated air mixed with layers of dust from Exley’s history threw me for a loop. The long corridors, lined with scattered steel cabinets were covered with heavy layers of dust, accumulated during Exley’s history of almost 50 years. We barged through scattered remnants of furniture and scientific equipment in search of the reported collections of fossil casts. Unsurprisingly, an obstacle got in our way: a locked gate in a steel fence. Our expedition specialist was able to produce a key to that lock, and the view in front of our eyes was breathtaking.

In front of us was a mountain of old scientific equipment. Looking at a pile of discarded Apple II computers and rows of iron cabinets with mysterious materials inside, as well as piles of cardboard boxes, we knew that it was going to take some time to find all the rumored fossil casts. Luckily, we easily distinguished some of the fossil casts among all the other things, mainly due to the sheer size of the wooden pallets holding some of the casts. Even so, the actual data collection on the casts, and identification of the fossils, required a considerable amount of time, muscle, and expertise.

Then, something dramatic happened: while we were clambering over the dusty cases containing the plaster casts, all the lights went out. While we were not in danger of tripping over the mountain of unused equipment, the darkness stopped our operation entirely. Understanding the major problem we were facing, I volunteered to make the track back down the Penthouse elevator in search of help. With the help of our technician, we were able to restore the light to our excavation area. Who would have thought that working in a museum could be this dangerous?

Our grimy and dusty expedition yielded substantial results. We were able to document the presence of valuable fossil plaster casts of unusual fossils not seen for more than 40 years. We discovered more than 50 fossilized fish casts, mammal skulls and crocodile teeth, and even a life-sized cast of a Homo sapiens skeleton – human skeleton in laymen’s term. One particularly interesting specimen was a cast of a tail of a Glyptodon, an extinct giant armored mammal which lived during the Pleistocene epoch, a relative of the living armadillo. According to the official records from the 1970s, the plaster casts were supposed to include a full body replica of Glyptodon, which means a complete set of tail, body, head, and limbs. Judging from the size of the tail, we estimated that the complete cast of a full-sized replica of a Glyptodon would be around the size of a small city car or a classic Volkswagen. We did not find the other parts – the body, head, and limbs – so these may have been lost or still out there somewhere, around the campus. Besides those, we also found a number of Ichthyosaurus fossil casts, a marine reptile looking a bit like a dolphin (but not related to it), which lived in the Late Triassic and Early Jurassic. Lastly, we found a plaster cast of  Andrias scheuchzeri, the famous fossil of a giant salamander discovered in the early 1700s which were thought to be a man drown in the biblical Deluge. All in all, the expedition was a success.

Many might think that museum work is about a few curators watching people, telling them not to touch the artifacts or the paintings. While the job could involve a little bit of that, curators are actually enthusiasts on their subject matter, and they preserve crucial scientific specimens for the good of humanity. The Joe Webb Peoples Museum at Exley is no exception. However, my job is not over yet. We caught another rumor that a cache of fossil may have been stored in the tunnel system below Butterfield College and Foss Hill dorms. Another journey awaits! 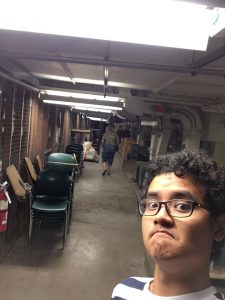