We are very excited to announce a visit to Wesleyan by

Dr Johnson will give a public lecture:

Natural History in the Age of Humans. 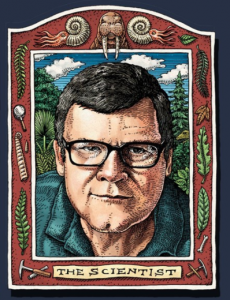 Natural history museums represent a fundamental tool to understand and preserve Earth’s natural and cultural heritage. The public perception of museums as educational experiences masks their deeper value to human society as the creators and keepers of our knowledge of the natural and cultural world. With a rapidly growing world population, food insecurity, infectious diseases, and invasive species are problems that may find their solution in the genomics of biodiversity housed in museum collections. Minerals, meteorites, and fossils are the physical evidence of the planet’s history, climate, biological evolution, and resource base. In an increasingly digital era, museums are one of the last bastions of the real thing.

Dr. Johnson oversees more than 440 employees and a collection of more than 145 million objects—the largest natural history collection in the world. Kirk Johnson is a paleontologist who has led expeditions in 11 countries and 19 states that resulted in the discovery of more than 1,400 fossil sites. His research focuses on fossil plants and the extinction of the dinosaurs. He is known for his scientific articles, popular books, museum exhibitions, documentaries, presentations, and collaborations with artists to reconstruct ancient ecosystems. In 2010-11, he led the Snowmastodon Project, the excavation of an amazing ice age site near Snowmass Village, Colorado. This dig recovered more than 5,400 bones of mammoths, mastodons and other ice age animals and was featured in the NOVA documentary, Ice Age Death Trap, and in Johnson’s book, Digging Snowmastodon: Discovering an Ice Age World in the Colorado Rockies. His latest book, Ancient Wyoming, explores the prehistory and geology of the Bighorn Basin.

For Wesleyan, it is especially exciting to welcome Dr Johnson, because he is the present occupant of the position first held by the man who started his museum career as the first curator of the Wesleyan Museum of Natural History and the son in law of Orange Judd, ichthyologist George Brown Goode. 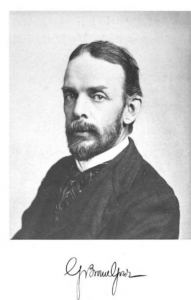 By that time, we hope to also celebrate the return to public life of Wesleyan’s cast of Glyptodon, as discussed in several earlier blogs. She will be exhibited in the lobby of Exley, between the entrance to the Science Library and Tischler Hall. 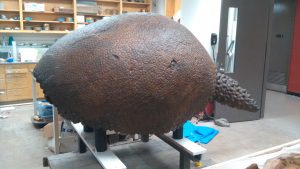