On the Fourth Floor of the Wesleyan Exley Science center is the Joe Webb Peoples Museum, named after the late Professor Joe Webb Peoples, who was chair of the Geology department (now named Earth and Environmental Sciences), from 1935 until his retirement in 1975. He was highly influential in the establishment of Dinosaur State Park when dinosaur footprints were discovered on state land in 1966.

The museum has collections of beautiful minerals (including a large collection of Connecticut minerals), and amazingly preserved fossils. The dinosaurs leaving the footprints roamed around lakes in which is now the Connecticut River valley, about 200 million years ago. Thousands of fish living in these lakes (and insects and plants) were preserved as fossils, and are well represented in the collections at Wesleyan.

In addition, the museum has beautifully preserved fish, leaves and insects from the Eocene Period, when the world was much warmer than today (about 40-45 million years ago). These organisms lived in what is now Utah, Wyoming and Colorado. There are also fossil plants from the coal deposits in Illinois (about 300 million years old), as well as fossil sea lilies (crinoids) which lived in shallow warm seas in what is now Indiana at about the same time as the coal forests grew. Many of these fossils were collected by S. Ward Loper, who was curator of the Wesleyan Museum from 1894 to his death in 1910.

Sadly, few people are aware that Wesleyan has these unique resources. The collections have not been well curated, and not much used in education and outreach.

In this series of blogs we will tell stories about the Wesleyan museum collections, the Wesleyan Museum, and the people who were involved with the museum over the years, and make the Wesleyan community aware of this great resource. 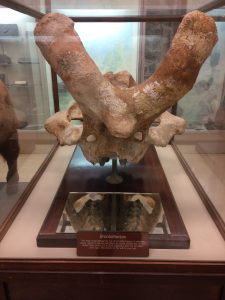 Front view of the skull of a Megacerops, better known by the synonym of Brontotherium. This is the skull of a very large herbivore (up to 14 ft in length, 8 ft  shoulder height), browsing on low-growing vegetation, living on the North American continent in the Eocene period.  These animals became extinct when global climate cooled at the end of the Eocene.            This specimen was collected in 1889 by Yale Professor O. C. Marsh in the White River badlands of South Dakota, and bought by the Wesleyan Museum in 1929.