On an otherwise mundane and maybe even a little boring and long list of state symbols, ranging from the state flower: “mountain laurel” to the state song: “Yankee Doodle,” Connecticut has an unusual symbol which is not well-known among its inhabitants: a state fossil. The Constitution State’s very own state fossil is Eubrontes giganteus, commonly known as a (large) example of dinosaur tracks or footprints.  Wesleyan University proudly displays these fossils (among other dinosaur footprints) in a very visible spot on the wall of the Exley Science Center, in its first-floor main corridor next to the science library and the ‘Fish Bowl’, where many people pass by them every day. Connecticut and Wesleyan University played an instrumental role in the academic field of paleontology in America, as documented by the discovery of our state fossil.

Now, you might wonder as to why a quiet New England state such as Connecticut would have a dinosaur footprint as state fossil: the quaint colonial-era towns and rustic environments do not appear to mesh well with the Jurassic-Park-settings such a fossil seems to evoke. In truth, Connecticut is home to one of the earliest-known and most prominent fossil-bearing formations in the United States, with red rocks in the Connecticut River Valley being the destination for American fossil hunters since 1836. The fame of Connecticut’s fossils started when Edward Hitchcock, professor of Geology at Amherst College, was made aware of what appeared to be gigantic bird footprints along the river bank near the border between Massachusetts and Connecticut. At that time, it was not known what dinosaurs were: their huge skeletons were first described as ‘dinosaurs’ (terrible lizards’), that is, now-extinct, gigantic relatives of modern lizards, by the English paleontologist Sir Richard Owen in 1842. Professor Hitchcock remained convinced that these gigantic 3-toed footprints were made by prehistoric birds. It was not until 1954 that Richard Swan Lull finally described the maker of these footprints fossils as a carnivorous theropod, a type of dinosaur. Connecticut might have been famous for the clam chowder and the friendly New England towns to the public, but for the paleontological community, Connecticut’s fame as a destination for research was anything but “new.”

The name assigned to the fossil which is now the Connecticut state fossil was Eubrontes, in classical Greek “true thunder,” possibly to indicate the heavy impact of the footsteps of these “thick-toed birds”.  However, we now know that Hitchcock’s early idea was, in fact, closer to the present scientific theory about relationships of dinosaurs to living animals, i.e., they are close relatives of birds, rather than of lizards. In fact, scientists now talk about ‘avian dinosaurs’ (that is, birds), and ‘non-avian dinosaurs (dinosaurs), and many species of dinosaurs are known to have been feathered. Professor Hitchcock’s original theory, while inaccurate, expressed an observational idea that was not far from our modern understanding.

The discovery of the fossil footprints and their collection in the 19th century made the Connecticut River Valley widely known as a key fossil-hunting area in the New England region, and in the 19th century American scientific community, Connecticut was a prominent location for research in paleontology. In addition to the dinosaur footprints, thousands of fossil fish have been found, which were living in the lakes in the dinosaurs’ habitat.

In 1966, workmen from the Connecticut State Highway Department found hundreds of specimens of the three-toed dinosaur tracks (and other tracks) around Rocky Hill, Connecticut. This led to the establishment of the “Dinosaur State Park” just three weeks later by the then-Governor of Connecticut, John N. Dempsey. The museum in the Department of Earth and Environmental Sciences (4th Floor Exley) was named after the late Professor Joe Webb Peoples, who was instrumental in the establishment of Dinosaur State Park. If you are interested in who Professor People was and what role Wesleyan University played in the shaping of American paleontology, visit the Joe Webb People’s Museum on the fourth floor; there are more surprising stories of our University waiting to be told.

To commemorate that dinosaurs once (about 200 million years ago) walked in Connecticut and that their footprints are abundant in Dinosaur State Park, Eubrontes giganteus was designated the official state fossil in 1991. For any curious students wanting to see our state fossil for themselves, just look along the wall of Exley; you will find several enormous pieces of history right before your eyes. 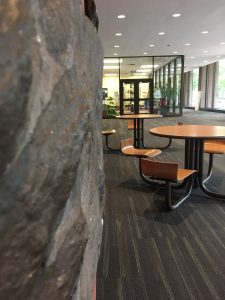