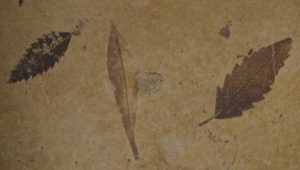 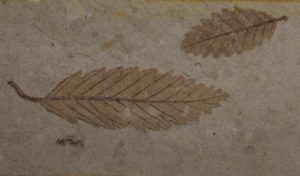 Fossils of dinosaurs, trilobites, and wooly mammoths typically attract more public attention than fossil plants. Although they are not as eye-catching to most people, fossil plants are far more important than this lack of  interest suggests. They help reconstruct the morphology and evolution of long-extinct plant species (which are at the base of food chains, and thus affect whole ecosystems), and they are also among the most important sources of information for scientists trying to understand Earth’s past (paleo-) climates and environments. In recent decades, a growing interest in paleoclimate has accompanied the growing concern about climate change. In addition to documenting past climate change, paleoclimate data play an important role in testing climate models used for predicting future patterns of climate change.[1]

What makes plants such great indicators of former climate? Most plants are sessile, so they are dependent on the climatic conditions of their location. Like all organisms, plants have been forced to adapt to their surroundings to survive, and these adaptations may be recorded in their fossilized remains. Therefore, careful interpretation of a fossil plant provides clues as to in which terrestrial conditions that plant lived. Fossilized leaves are especially good at recording past climatic conditions. Because leaves are the primary photosynthetic organs of a plant, they are optimally adapted to environmental conditions and can react sensitively to environmental changes. Several methods have been developed to use the characteristics of fossil leaves to reconstruct paleoclimate. 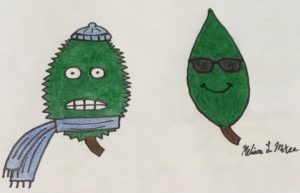 In most regions of the world, the proportion of woody, dicotyledon (or dicot) tree species with leaf teeth (serrated edges on the leaf margins), is inversely correlated with mean annual temperature. In addition, leaves from plants growing in cold climates are more likely to have larger and more numerous leaf teeth. Since leaf teeth can be observed and measured in leaf fossils, scientists have developed models to quantitatively reconstruct terrestrial paleotemperature from leaf teeth in fossils.[2] Models have also been developed to reconstruct other paleoclimate variables from the size and shape of fossilized leaves. For example, scientists can use the size of fossil leaves to infer past levels of precipitation, because larger leaves tend to be more prevalent in wetter climates.[3]

Another way to infer paleoclimate is by looking at the characteristics of the cuticle—the waxy, protective surface layer on the leaves of higher plants—of fossilized leaves. Scientists can look at the abundance of trichomes (leaf hairs) on the fossilized cuticle to infer water availability, because trichome density is often higher in plant species adapted to arid environments.[4] 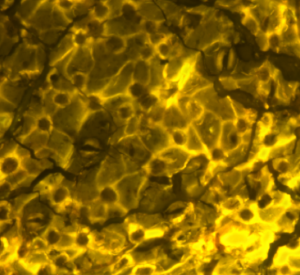 Stomata are small pores on plant surfaces surrounded by a pair of specialized guard cells that control gas exchange between the plant and atmosphere, influencing both photosynthesis and transpiration in the plant. Stomata on the cuticle of fossil leaves can be used to estimate atmospheric CO2 concentrations in Earth’s past. This is especially useful to scientists because there are no direct measurements of CO2 prior to the oldest ice cores, in which air bubbles are preserved (~1.5 million years old).[5] On the other hand, stomata have been around since about 400 million years ago[6] and, with some rare exceptions, found in all terrestrial plant groups. Plants change the number and/or size of stomata to optimize carbon uptake for photosynthesis, while simultaneously minimizing water loss.[7] Stomatal density (the number of stomata per unit area) and stomatal index (the percentage of epidermal cells that are stomata) are negatively correlated with atmospheric CO2 concentrations in many living plants; therefore, changes of stomatal density and stomatal index in fossil leaves are considered to represent changes of CO2 concentrations in the geological past.[8] Scientists have developed models to use the stomatal density or stomatal index of fossilized leaves to estimate the CO2 concentration of Earth’s atmospheric when that plant was alive. 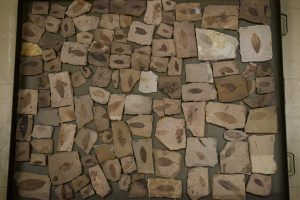 The Joe Webb Peoples museum has hundreds of fossil leaves from the Florissant fossil beds in Colorado .

Another way to use fossil plants to infer paleoclimate is to identify the nearest living relative of that fossil, of which the current climatic tolerances are used to infer past climate. For example, by analyzing fossilized plants from the Florissant fossil beds in Colorado (about 34 million years old), it was found that the fossilized plants most resemble modern deciduous forests of the eastern United States and the humid subtropical forests of central and northeastern Mexico.[9] In addition, the discovery of fossilized palm leaves as well as an analysis of fossil pollen and spores support that it was once a warm, relatively frost-free temperate climate[10], which is very different from Colorado’s climate today. 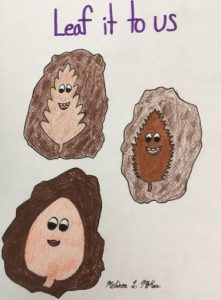