The Joe Webb Peoples collections here at Wesleyan contain an incredible amount and variety of corals, ranging in age through the Paleozoic, Mesozoic, and Cenozoic eras to the late 1800s. These corals can tell us many things about Earth’s environments in the past, from just before the industrial age back to the far distant past.

If you have never heard of corals, they are Cnidarians (the Phylum containing the stinging jellyfish). Corals are sessile (do not move) animals, that look more like an elaborate plant than an animal, with a hard outer skeleton. Many but not all corals are colonial, i.e., they live in large colonies, built up by their skeletons, and form coral reefs. They form these skeletons through secretion of calcium carbonate attached to a hard substrate (usually previous generations of coral). It can take hundreds to thousands of years and many generations for a large coral reef to form. Inside the hard calcium carbonate skeleton is the coral’s polyp, a small organism with one opening 9mouth and an us), tentacles, and a stomach. Corals require water movement to bring in food and to flush waste products. If the water is too murky, the corals can be choked by sediment.

In the long ago time period called the Paleozoic (from ~ 541 to 252 million years ago) two main groups of ancient corals, now extinct, dominated Earth’s reef systems, the Tabulate and the Rugose corals. The Tabulate corals were almost always colonial and formed calcite skeletons of hexagonal or circular cells that were joined by pores and resembled honeycombs. The Rugose corals were generally bigger and had a mixture of both solitary and some colonial species. They are commonly referred to as horn corals. We are the lucky owners of exceptional specimens in our collection that display how these corals likely rested on the seafloor. Only the carbonate skeletons of these two ancient groups are preserved, but it is commonly inferred that these Paleozoic corals also possessed the stinging cells with which all Cnidarians are equipped. It is also unknown whether the colonial corals of the past oceans were involved in a similar symbiotic relationship as some modern corals are, with zooxanthellae (see below). 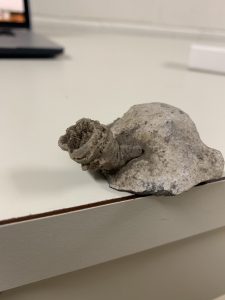 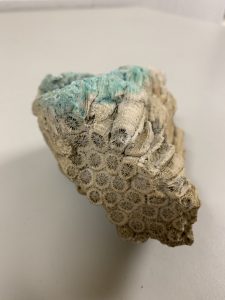 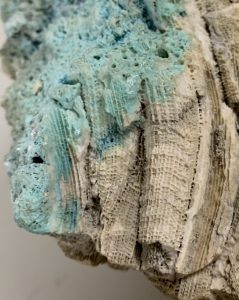 A solitary rugose coral preserved as perched on the seabed (left). This incredibly well-preserved tabulate coral shows the colonial nature of these organisms (middle). If you look closely you can see the honeycomb structure for which these corals are famous  (right). The origin of the blue-green color is a bit of mystery.

Modern corals, which originated after 252 million years ago in the Mesozoic, are called Sceleractinian corals. They are divided into two main groups: hermatypic and ahermatypic corals. The former (hermatypic) corals have a symbiotic relationship with zooxanthellae (a form of microscopic algae) in their tissues, but the latter (ahermatypic) corals do not rely on photosynthesis by internal algae, and must catch their food. We just can say that these hermatypic corals are at the same time animal (the polyp), vegetable (the symbiotic algae) and mineral (the calcareous skeleton).

Hermatypic corals are restricted to clear, shallow waters in the photic zone because their internal algae need light to photosynthesize. The relationship allows hermatypic corals to live in food-poor waters, and there form the massive reefs that make corals famous. Ahermatypic corals do not need light, and thus can survive at great depths, in cold and dark waters, up to 6,000 m, at temperatures only 1 ºC above freezing. Many deep-sea corals are solitary and do not form large reefs, although diverse deep-water reefs have become known in the last few decades. Coral bleaching of hermatypic corals occurs as our oceans are getting warmer and more acidic: the zooxanthellae – symbionts of these corals  are expelled from their coral partners, thus turning the coral white. Such white corals do not longer receive food from internal algae, and die. 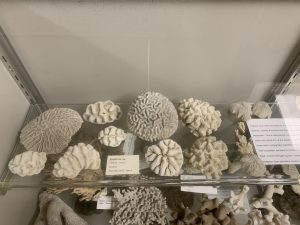 Modern colonial corals on display on the 4th floor of Exley , including the unmistakable and popular brain coral in the middle.

Corals have distinct banding on their epitheca, which is the name for the external layer of their hard calcium carbonate skeletons. These bands have been known to represent annual growth, similarly to tree rings. The annual bands contain finer bands, that are thought to represent monthly growth, and the monthly bands are made up of even finer bands. These finest bands are presumed to be daily growth layers, due to the periodic deposition of calcium carbonate by corals: more deposition when it is light, during the day time, when the zooxanthellae are actively photosynthesizing, less at night, as shown by Thomas F. Goreau for living corals. This similarity between living an d extinct corals has been used as evidence to support the theory that these bands in fossil corals are also growth bands. 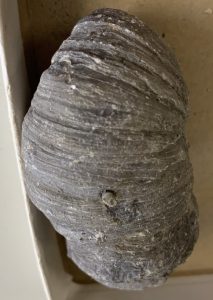 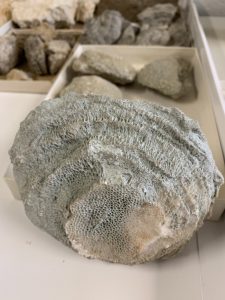 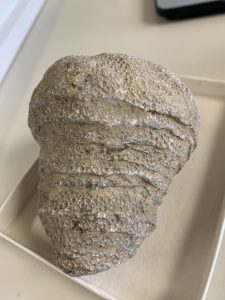 Examples of growth bands in Paleozoic corals in our collection  at Wesleyan. The fine bands that likely represent daily to monthly growth patterns are clearly seen in the specimen to the left, while the other corals shows  radial growth and honeycombing. All three specimens are from the early to middle Paleozoic.

During Earth history, the length of a day has increased, because the friction from the ocean’s tides slows down the Earth’s rotation along its axis. The Earth-Moon system thus loses energy from this friction, and the Moon is moving away slowly form the Earth. Over millions of years, these infinitesimally small changes add up, and the number of days in a year decreased.  Researchers use the knowledge that coral fossils have fine banding representing daily deposition, and they can count these bands to use corals as a clock. A geologic calendar capable of providing precise measurements of the days in a year, millions of years ago.

The first to present this observation  was John W. Wells of Cornell University, who reported a count of the fine bands within the larger annual bands on several middle-Devonian (~ 385 million years old) coral specimens. His count ranged from 385 to 410, which gave an average of around 400 days in a Devonian year. Wells repeated this counting process with a younger Carboniferous coral (~ 330 million years old), and found an average of 380 bands.

This counting method has its difficulties, mainly human bias. Workers in this field might know the expected number of days in a month or a year in the geologic period on which they are working, and this knowledge may subconsciously affect their count. This can happen because the bands vary in distinctness, making it in some cases difficult to distinguish the start of a new band from the end of a previous band. To overcome these obstacles, S. K. Runcorn and colleagues at the University of Newcastle have been experimenting with methods that automate the counting process. One involves photographing the epitheca and using the negative as a diffraction grating to demarcate the beginning and end of each band. Another method uses chemical analysis to detect minute differences between the layers.

With these new methods, we can improve the time keeping of clocks which died hundreds of millions of years ago, but still tell us how many days there were in the year (one cycle of the Earth around the Sun)..