Our Wesleyan natural history collections include many taxidermy specimens of birds (‘stuffed birds’), some of which can be admired in display cases along the hall ways of Shanklin, 2nd floor. Other were stored haphazardly in the storage room on the 3d floor of Exley, on top of display cases in the Joe Webb Peoples Museum on the 4th floor of Exley, and randomly in various labs and offices. One of the latter is a specimen of a Great Horned Owl or tiger owl or hoot owl (Bubo virginianus  Gmelin 1788), a large owl native to the Americas.

Great horned owls are very adaptable birds, and the most widely distributed owl in the Americas. Owls have very large eyes, as compared to humans:  a Great Horned Owl weighs about 3 ½ – 4 pounds, and its two eyes together weigh almost an ounce, more than the eyes of a 200-pound human.

‘Eyeballs of Owl‘ may sound Halloween-y, but owls do not have eyeballs because their eyes are long and shaped more like a tube, and the eyes thus can’t turn in their sockets. 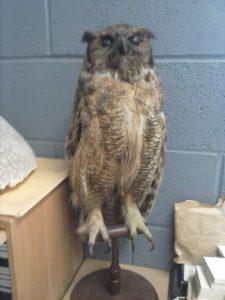 Our poor Wesleyan owl (see above) had been sitting neglected in a lab in Exley since 1970 (when Exley opened), in danger of being harmed inadvertently by lab users, and slowly falling apart. I like owls, so I put it in my office ‘for safe keeping’ (owl-napping?). Recently, ‘my’ owl  was included in a set of birds picked up for repairs by Michael Anderson, an ‘exhibit preparator’ at the Yale Peabody museum, and an expert in working with dilapidated stuffed birds. He is in charge or restoring the amazing dioramas (and their animals)  in the Yale Peabody, thus has ample experience in cleaning and repairing taxidermy mounts.

Many of the Wesleyan taxidermy birds (and our stuffed buffalo, Greg) date back to the late 19th century, thus are more than a hundred years old. Many are in need of some cleaning: the Wesleyan Museum of Natural History in Judd Hall (1871-1957) was heated by coal-fired heaters, and many specimens are dulled by coal dust. They also need repairs of fur and feather, and in some cases bright new glassy eyes. Michael has worked on quite a few of our birds, including the peacock which is now exhibited in the Science Library.

When Michael started work on the owl in fall 2019, he ran into something he had never seen before, although he has worked with many old taxidermy specimens: the old and dull eyes were not made of glass. He could not tell of what they were made, and mentioned wood or wax as possibilities. Here are the old eyes, dull black blobs.

Michael noted that the eyes were covered with lacquer that had, over the years, crazed or crystalized, giving them a dull shine rather than the glossy shine of glass eyes. Horned owls typically have pupils in their glass eyes, which has the effect of giving them a more focused look, and they have bright yellow eyes.

So we have a taxidermy bird in our collections containing interesting historic materials. We asked Michael to replace the eyes by new glass ones, and we will see whether we can study the old eyes, maybe by using Wesleyan’s scanning electron microscope, and find out  what they are. Above: the owl’s head before and after restoration – with its bright new eyes.

We also will do more research in the Olin Library Special Collections and Archives , to see whether we can find out the origin of the owl. Until now, we have not yet found it in the information on stuffed birds, so we do not know how old it is, and from where he was given to Wesleyan. He might have been part of a collection of taxidermy birds in the Shurtleff Collection, which was obtained by Wesleyan from Simeon Shurtleff in 1868, containing birds collected in the two – three decades before that. The Shurtleff collection thus pre-dated the establishment of the museum in 1871. Or it may have been part of a collection of Connecticut birds from Charles H. Neff (obtained in 1875) or from Henry Marshall (1878) who provided birds to George Brown Goode, the first curator of the Wesleyan Museum, who also collected birds himself. In addition, quite a few birds arrived at Wesleyan as single specimens, donated by alumni. Our Peacock was such a single specimen, as is our resplendent Quetzal (both in the Exley science library).

As to the owl, Michael noted that its right-side ear tufts are missing their long feathers, and he found some new feathers to restore its head (see above). We thus had ‘my’ owl restored to its old splendor, so that it can be included in a future exhibit, now postponed due to the pandemic. However, I am attached to it, and it is very good to see it back in my office, with bright new yellow eyes glaring – just compare to the sad old owl above. 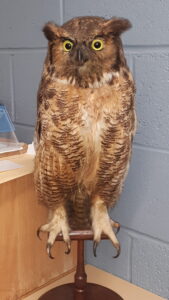 More to read about owls: